A limesfalschung as of Severus

This as of Septimius Severus from my collection is not all it may first appear. It is an ancient cast copy, weighing in at 4.3 grammes, compared to an official as of the period that would likely be in the 9.5 to 11.5 gramme range. It is an example of limesfalschung.

What is interesting to me is that it appears that the same master coin was used to make the mold for this piece as a similar published example from Caerwent (that specimen weighing 4.37 grammes), minor casting blemishes notwithstanding and illustrated above. The cast sprue marks on my piece, below, match the location on the Welsh specimen (also marked in the plate illustration of the Caerwent coin) so may reasonably postulate the same unofficial, probably British, mint produced both.

In the late 10th century the Byzantine rulers embarked on a bronze coinage devoid of the emperor’s  name. Theses may be divided into 11 classes, labelled chronologically A through to I. The earliest, class A, features a nimbate or haloed facing bust of Christ on one side, combined with a legend in Greek on the reverse that, in four lines reads Jesus Christ King of Kings. Although appearing uniform study shows that they are far from that. 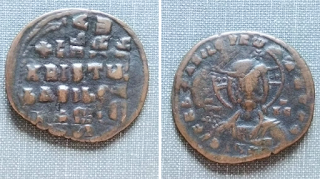 A1 overstruck on a follis of Nicephorus II

The class A coins may be further subdivided into two distinct groups. The earliest bear the designation A1 and are almost invariably found overstruck on the coins of Nicephorus II, Constantine VII or Romanus I.

The slightly later type, the so-called A2 do not tend to be overstruck and may be further distinguished from the A1 type by the presence of a series of marks. These marks are noted in four places; the halo and Bible on the obverse and then above and below the legend on the reverse. The scholar Albert Bellinger collated the combinations of known marks and came up with 51 distinct groupings. The numbering sequence of the 51 combinations does not imply a chronological progression. 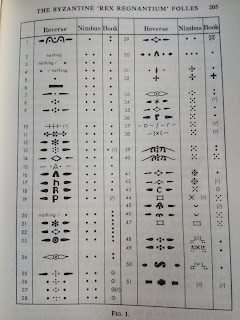 Whilst it may be just chance some believe that certain groups of symbols may indicate that subsidiary mint(s) may have been in operation besides Constantinople. This has been postulated on the basis of A2 hoards and site finds contain a disproportionately large number of certain symbol combinations. On that basis Metcalf postulated that Bellinger types 2, 3, 4, 5, 8 and 20 (and possibly 7 and 9) may be from a mint operating in central Greece. 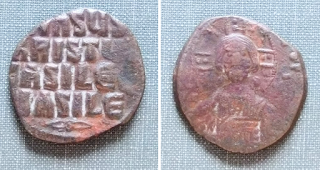 There is a further complication with the A2 coinage in that they do not all appear to be struck to the same weight standard. There is, again, a pattern with Bellinger number and weight. This can be summarised as follows:

That leaves 31 and 32, related by similar markings but apparently on two different weight standards (15g and 10g respectively). And finally 51 which may be related to 34. 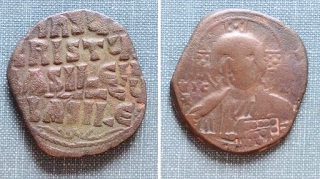 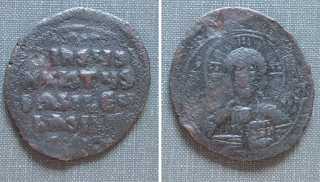 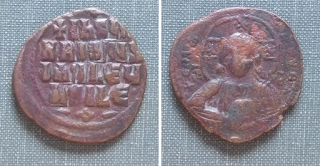 A coinage decree from Gortyna, Crete 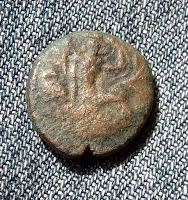 Not particularly well preserved this bronze coin originates from Gortyna on the Greek island of Crete. With a diameter of 18mm this bronze coin has, on the obverse, a woman (Europa or a nymph?) seated in a tree, a device used on the earlier silver coinage. The reverse has Europa, with her veil billowing behind her, riding on a bull that is abducting her, in fact, the god Zeus in the form of the animal. I have previously posted on the abduction of Europa by Zeus as a white bull (March 2019). 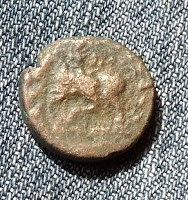 Dating to c. 250 BC this is apparently the earliest known type of bronze coin from the city. The city of Gortyna, in common with the other Cretan cities, was a late adopter of base metal coinage compared to the rest of the Greek world. 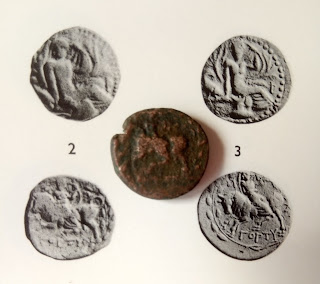 The reason for this late adoption is not clear. There may previously have been adequate supplies of silver to make small denominations that then got interrupted. Alternatively there may have been public resistance to the introduction of non precious metal coinage.

The idea of public resistance may be far from the truth as there is an inscription from Gortyna dated to around this time that fines people for not using bronze coinage.

“Make use of the bronze money, which the city has put in circulation, and do not accept silver obols. If anyone accepts in payment silver obols, or refuses to accept bronze money, or sells anything in exchange for grain (that is to say, receiving or requiring grain in payment), he shall pay a fine of five silver staters. Disputes in these cases shall be referred to the neotas, and of the neotas the seven who are elected as agoranomoi shall give judgment under oath. And judgment shall be rendered in favor of the party for which the majority shall have taken oath (that is to say, the judgment shall be given by the majority of votes), and this college of seven, having exacted the fine of the party which has lost the suit, shall give half to the party which has won the suit and half to the city. “

General Aureolus coins in the name of Postumus

I was first alerted to the coinage of the Roman General Aureolus when I was given Clive Foss’ book, Roman Historical Coins, as a Christmas gift in 1990. Until that time I was unaware of the series of coins from the mint of Milan issued under his authority, albeit in another’s name.

Aureolus had been a military commander under the emperor Gallienus, commanding the equities, the newly formed mobile army established at Milan. He oversaw the victory over Macrinus as the Eastern usurper moved west and advanced on Italy.

With the Eastern empire secured Aureolus then moved with Gallienus against Postumus. Something ultimately went wrong between Aureolus and Gallienus and in 267 he chose to take the side of the long standing western usurper Postumus. Gallienus besieged Aureolus at Milan but was murdered before the campaign was completed. It was clear that Postumus was either ambivalent or unable to help his ally and he surrender to the successor of Gallienus, Claudius II.

During his time in Milan, c. 267-8 AD, a series of base metal coins was struck by Aureolus in the name of Postumus. The mint name doesn't usually appear on coins of this period but the style is so distinct from the mainstream, coinage of Postumus. I have to say that I am somewhat sceptical of the extremely rare gold issues that exist in this series. Most, but not all, types honour the equites in the reverse legend.

The coins below are some of the examples of the small series from my trays:

The issues of Claudius II from the Antioch mint

Writing up the description of a coin the other evening I realised that I did not know how the Antioch mint coins of Claudius II were arranged. The standard reference work Roman Imperial Coinage 5 part 1 does not go into such detail. I am familiar with the four issue arrangement at Rome where changes in both obverse legend and reverse type are employed to distinguish the series. Similarly I have access to many western hoard reports where the Western mints predominate and so have a reasonable working knowledge of Milan and Siscia too. With Antioch, however, that is not the case and the Eastern coins are scarce in Western contexts. For example the large antoninianus hoard from La Venera only had a single Antioch coin of Claudius II.

We are fortunate though to have the tentative reworking of RIC 5 part 1 by the Bibliotheque National to explore for the coins of Claudius II. It is from their work that it become quickly evident that, similar to Rome, there is a four issue or series arrangement during his relatively short reign 268-70AD.

The arrangement they use is much simpler than the arrangement at Rome and is based on the characteristics of the reverse type, although series 1 does apparently get split on the basis of obverse legend, the earliest coins having the longer imperial name as was then custom. Besides the four series grouping they also introduce a chronology for the series. The series are as follows:

The earliest coins have the obverse legend IMP C M AVR CLAVDIVS PF AVG, October to November 268; the later legend IMP C CLAVDIVS AVG running from late 268 to late 269. The later coins with the shorter obverse legend have an officina or workshop letter in the exergue on the reverse. From this it is apparent that there were 8 workshops operating at Antioch and each workshop numbered their products in Greek numerals. 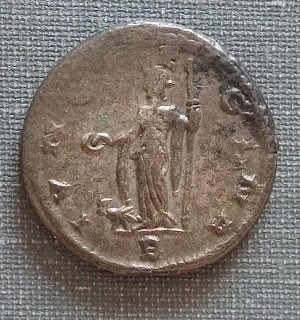 The officina letters/numbers are replaced by a disc or large pellet. From now on it is not possible to distinguish what reverses are the product of which workshop.

The large pellet has gone and is replaced by nothing in the exergue. All the reverse types have a single standing figure. 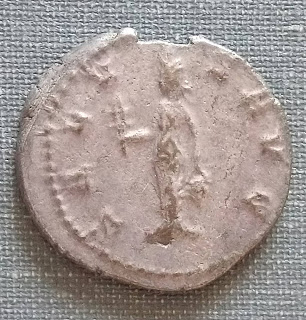 Still no mark in the exergue, however, all the reverse types have two standing figures. 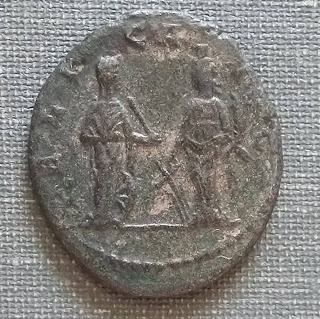 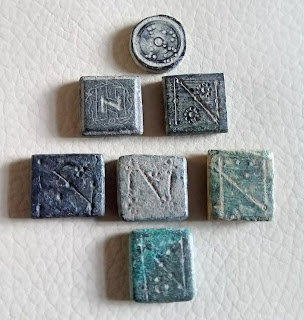 Why is it that most of the old metal Scrabble tiles I come across are for the letter N? Only joking! I’ve just taken possession of another ten ancient weights, seven of which are late Roman or early Byzantine. The letter N, engraved or punched in and then occasionally filled with silver stands for nomisma, an ancient name for the gold solidus.

There is, however, in the group a new denomination for my weight collection and that is the top, circular, weight. That weighs a little over 2.2 grammes and is punched IB in dots. This indicates 12 siliquae keratia, or, in other words a gold half solidus known as a semissis.

There are three more ancient weights in the group, yet to be photographed, that are currently awaiting identification.
Posted by Mauseus at 18:46

A Decursio sestertius of Nero

Towards the end of 2020 I was able to acquire a coin type that had been on my wish list for a long time but had always been out of reach, seemingly. The coin in question is a sestertius of the first century emperor Nero with the reverse legend DECVRSIO. There are a number of varieties of design, the one I picked up having Nero on horseback riding right with another soldier riding at his side.

Quite what is represented on the reverse of Nero’s Decursio coinage has been the subject of debate. Nero never led troops into battle and a military parade or exercises seems unlikely. Given his interest in the arts is is postulated that this is part of the performance of the lusus Troiae, a mock battle described in Virgil’s Aenid (V, 545-605) as the climax to the games commemorating the first anniversary of the death of Anchises.

My coin is a product of a Balkan mint, perhaps Perinthus, poorly documented and described in the revised RIC volume of the period and similarly treated in the appropriate RPC volume too. The Rome mint analogue is RIC 104. What suggests that this is a Balkan mint are the dimples in the centre of both the obverse and reverse of this coin, a common feature of provincial base metal mintages.