I want to return to something that at I've posted about before and that is what the Romans actually called their coins. The names we refer to them today are often a modern construct, yet we refer to them as if it is solid fact.

Today I want to consider the FEL TEMP REPARATIO coins instigated in AD 348.

The coin legend type was introduced, probably, in AD 348. It was initially produced in three sizes/denominations, the largest marked A contained c. 2.5% silver. The next size smaller, marked N, had a smaller proportion of silver, c. 1.5%, and the smallest unmarked pieces no detectable silver. It soon ended up as only a single denomination of reducing size and was eventually ceased around AD 359.

Modern collectors often group all the issues under the single heading of "cententionales", but this appears to be misguided given the documentary evidence available.

"We have learned that some metalworkers [flatuarii] purify the maiorina coins [maiorina pecunia] frequently and criminally, by separating the silver from the bronze. If any persons hereafter should be caught in this operation, let him know that he has committed a capital crime, and also those who own the house or land are to be punished by the delivery of their property to the largitiones [imperial largesses]."

It would thus appear from this edict that the Romans referred to the largest of the Fel Temp Reparatio pieces, that contained at lest a small proportion of silver, as a maiorina.

Some Gallienus coins from Antioch

One feature of he Moneta Imperii Romani (MIR) volume that covers Gallienus is the tabular catalogue arrangement that allows for bust variants not encountered by Goebl to be accommodated in the arrangement.

An example of that is this Antioch Gallienus. MIR 1655b from emission 13a, Sol.with globe rather than the whip. He noted just 3 examples with the radiate draped bust (MIR 1655a), but none with the radiate cuirassed bust.

I must get around to picking off the hard green deposit on the reverse.

Another coin of Gallienus from Antioch, this time from emission 13a, cf MIR 1641a. It shows a couple of interesting features with the obverse legend.

First of all there is the common substitution of B for V in IVVENTVS, probably reflecting a dialectic influence. However, the die cutter made a real howler by replacing I with L at the start of the word.

Top coin, curious, GENIV AVG, not listed in MIR but is noted as a footnote to 1630i with the legend error (emission 12). 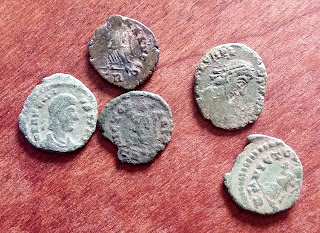 Sometimes the seemingly most mundane coins can give you a door into the history of the time. Indeed, when professor Grierson was asked about rarities in his vast collection of mediaeval European coins in the interview serialised in Spink Numismatic Circular in 1992 he commented that, whilst he owned some great rarities, it was the everyday coin that the person in the street was using that interested him most.
Take this small parcel of coins of the emperor Arcadius, all VICTORIA AVGGG pieces from the mint city of Trier in Germany and marked TR in the exergue.
The copper coinage at Trier was on a relatively small scale and was often completely absent after 355. The mint of Trier ceased production in 395 after an ephemeral copper issue in the name of Honorius and Arcadius with the reverse legend of VICTORIA AVGG, following the death of Valentinian I.
408-13 gold and silver issues in the names of Constantine III and Jovinus were struck. The last issues from the Trier mint were silver and copper in the name of Theodosius II and Valentinian III (425-50), closing for the last time around 430.
These VICTORIA AVGGG pieces, terminating in 394, are the last substantial copper issue from the mint.
Given the sporadic coin issues it is worth exploring the history of the area at that time and we learn that it is rather troubled.
Sometime after the death of Valentinian, the office of praefectus praetorio Galliarum was removed from Trier to Arles. It would be tempting to link this to the cessation of base metal coin at Trier in 395, but this is not necessarily the case.
In 401 Stilicho recalled troops from the Rhine, having already been partially depleted by Eugenius for his move against Valentinian, and this loss of military presence may mean the relocation of the praefectus. It could even be some five years or so later.
In 406/7 there was an invasion of Vandals, Alani and Suebi. They crossed the frozen Rhine at Mainz 31 Dec 406, the people of Trier making a “last stand” in the amphitheatre, if the chronicler Fredegar is correct, in 407.
Grierson, P, and Mays, M; Catalogue of late Roman coins in the Dumbarton Oaks Collection (1992)
Pearce, J. W. E; Roman Imperial Coinage IX (1932)
Wightman, E. M; Roman Trier and the Treveri (1970)
Wightman, E. M; Gallia Belgica (1985)
Posted by Mauseus at 22:46

A twelve labours denarius of Postumus

Last year I managed to acquire an example of a coin that had been on my “bucket list” for many years. The coin in question is variously described as a denarius or as an abschlag, an off metal strike from dies intended for gold coinage, in this case an aureus die.
POSTVMVS PIVS FELIX AVG
Laureate, cuirassed bust of Postumus with bust of Hercules, jugate, right
HERCVLI NEMAEO
Hercules facing left wrestling Nemean lion
Mint 1 (Trier), Schulte group 11a
Schulte 122, RIC 349, Elmer 523

Schulte records a number of aurei and denarii of Postumus with the bust jugate with Hercules on the obverse. However, the coins of Schulte’s 11th group are of particular interest. In this group there are a series of reverse types that depict some of the twelve labours of Hercules.

Schulte’s 11th group is dated to AD268 and is associated with the fourth consulate of Postumus and the beginning of his decennalia celebrations, but why the association with the labours? It has been suggested that this special group of coins marks the conclusion of a struggle and it may be no coincidence that Postumus inflicted a defeat on Gallienus at this time. In this defeat we learn from the ancient writer Zonaras that Gallienus was significantly wounded, being struck by an arrow in the back.

To support this theory there is, in Schulte’s 11th group, a denarius that combines the Postumus and Hercules jugate bust with the PAX AVG reverse from antoninianus dies, suggesting a period of tranquility was occurring.

The Herculian labours coins are all of the greatest rarity. The superb Thys collection of Gallic coins was lucky enough to have four of the labours denarii, but not the Nemean lion type. In Schulte type 122 is represented by only a single example (British museum, ex de Salis, Sparkes and Dupree collections), making this piece probably only the second recorded example.

Tetricus I, confirmation of the SALVS AVG type 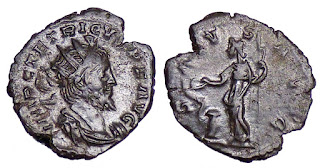 Anyone who follows Roman Imperial Coinage (RIC) for the antoninianus coinage of the Gallic Empire will be sadly misguided . What you really need to familiarise yourself with are the hoard reports from the western provinces, Markus Weder’s two SNR papers correcting Schulzki’s AGK and Jerome Mairat’s PhD thesis. 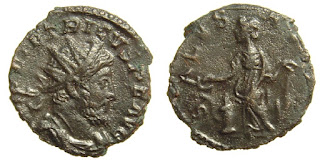 Although RIC 121 suggests that SALVS AVG Salus feeding a serpent rising from an altar whilst holding a vertical sceptre is a common type it is rather unusual . Elmer lists the type (Elmer 776), but examination of the plated coin, missing most of the emperor’s name is a coin of Victorinus looking at the portrait style. The same conclusion has to be reached for a coin sold through the CGB Web shop and listed on acsearch.info. Schulzki included the type in AGK, number 19a, although Weder was unable to find an example and concluded that the type probably did not exist. This coin, iilustrated at the top of the note and seemingly from official dies, confirms the existence of the type.

Rare examples have been noted pairing the DIVO VICTORINO PIO obverse with the SALVS AVG reverse, Mairat notes four occurrences and illustrates the two British Museum specimens. It important from a mint attribution point of view as the consecration coinage for Victorinus was seen as a Mint 2 product because of the pairing with the Victorinus lifetime reverse of PROVIDENTIA AVG, but SALVS AVG is a Mint 1 type for him.

The late use of a probable Victorinus reverse die combined with a Tetricus senior obverse is unusual. One might expect the Deified Victorinus coins to be produced at the beginning of the reign of Tetricus and so the potential for dies to get mixed up. However, on this coin, with the obverse legend IMP C TETRICVS P F AVG, it has to be produced after the legend contraction removing the praenomen Esuvius.

It is not noted in any of the Coin Hoards of Roman Britain (CHRB) hoard reports, including the large finds like Cunetio, Normanby etc.

Mairat, J; The Coinage of the Gallic Empire, PhD Oxford, 2014

The demise of a Yorkshire token issuer 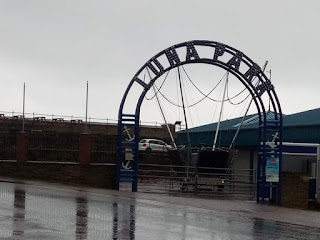 Visited Scarborough the other day. Sad to see the Luna Park funfair site empty, but hopefully it is only temporary. Apparently the Tuby family who ran it for years have given it up and the lease had now been taken over by another company who plan to revamp it. I don't know if they will retain the name so posting here along with a couple of slot machine tokens known from there, given their size they are presumably 10p tokens from the 1970s, information seems scant. 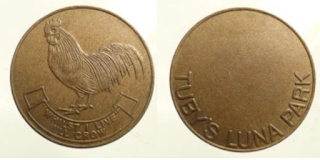 The SPQR mint(s) of Gallienus and Claudius II 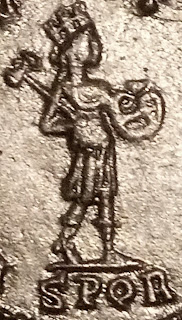 The latter half of the third century saw the number of Roman mints beginning to expand, and, at the same time, the number of mints striking the civic coins go into rapid decline. The new mints are usually not named on the coins and we need to use find spots and style to propose mint locations.

It is against this background that we see a series of coins beginning late in the reign of Gallienus and continuing into Claudius II marked with SPQR on the reverse.

RIC is of little help here in that it gives them to “Asia” under Gallienus, perhaps Antioch as pellets on the obverse are sometimes seen under the bust on the obverse, similar to the Antioch coinage of Trebonianus Gallus. For Claudius II it places them at Cyzicus, recognising that the later coins marked MC are stylistically similar.

In 1975 a paper in the British journal, Numismatic Chronicle, recognised that the SPQR series under Gallienus may be Cyzicus, but the author suggested that all the Asian sole reign coins of Gallienus were from the same location, eliminating Antioch as a mint from the time.

Gysen proposed an arrangement that agreed that the SPQR coins were ultimately produced at Cyzicus, but the original location was Smyrna (CENB 1999). The change in location was proposed to have taken place early in the reign of Claudius, recognised in the coinage by a first emission of unmarked coins, the adoption of the MC mark for the second before reverting back to SPQR for the third and dropping all marks again for the fourth and final emission.

Huvelin supported the idea that Smyrna may have been the original locus of the mint. This was based partially on stylistic criteria, but also on the commonality of a reverse device, an Amazon holding a bipenis, that occurred on both the civic issues from the city and an antoninianus type of Gallienus.

Gysen’s arrangement is not ideal, given the transition of marks, SPQR to MC to SPQR to nothing. It is not the organisation adopted by the BnF for the cataloguing work in preparation of the RIC revision. The SPQR coins attributed to Smyrna seem to be limited to the first emission through to early 269. After this date the establishment ceases and production transferred to Cyzicus and there is a mixture of SPQR, MC and unmarked coins, depending on the emission. 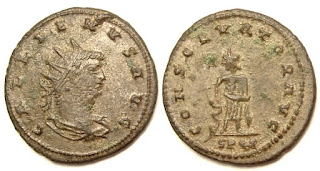 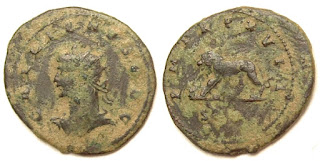 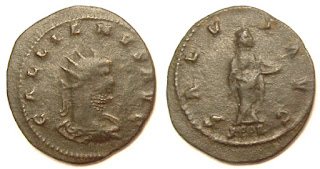 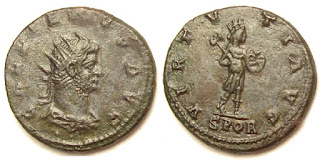 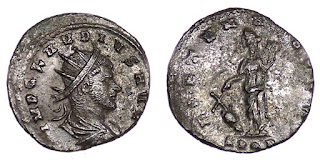